Well - my house is a bungalow with a peaked roof.  It is insulated well and at this point inaccessible as the attic hatch was sealed to save energy.

There is a lovely little flock of sparrows that roost every evening in my cedar tree out front.  I couldn't figure out where they were coming from until my neighbour Julie pointed out they were nesting in my eaves!  Damned if there isn't a small hole in the fascia (or is it a soffit?) front and back of my house and the little buggers got in and built a small city in my attic eaves.  :-(  In the morning it is like a clown car of sparrows as they all shove their way out the small hole.

I can't bring myself to seal the holes until the babies fledge and fly out.  I know it is the practical thing to do but I just can't.  They are pretty big and should be moving out soon.  I will wait until everyone has left the attic for the day and then put up temporary screening over the holes.  Hopefully that will let me identify if any are trapped inside and release them.

So "Birds in my Attic" seemed an apt title and one my friends will assume refer to the scattered way my brain works rather than wee birdies actaully living in my attic.  :-)  It makes me smile and will stay as the title.

Well, it has been over a year since I posted - hard to believe I actually have a degree in Creative Writing with this kind of record!  :-)

Since moving to Winnipeg I have secured my job at the Royal Winnipeg Ballet as the Footwear Manager and, in February, bought a wee little house built in 1913 and moved in on my 1st anniversary of moving to Winnipeg.  It is on a small lot (25' x 90') but has a true south oriented backyard that I am currently working to convert from white pea gravel to a garden with a living driveway.  It will be a couple of years until I am done but I think it will be good for my body and my soul.


This is how it looked when the gravel was just installed, probably 2 years ago, when I moved in it was much grayer looking and compacted as it had been used as a parking lot continuously. 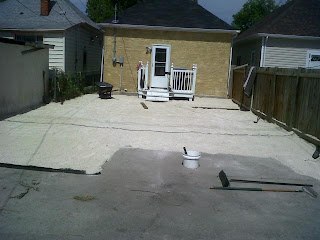 Below is the front of the house (again taken about 2 years ago) - that is a tree form cedar in the centre and a paper bark birch to the right.  It has a nicer form of gravel - black stone.  Yesterday I planted  my first shrubs - 3 cotoneasters on the right side behind the firehydrant and 2 native, redleafed roses on the left side of the walk.  There will be a lime green 9 bark between the 2 roses to add a hit of contrast.  Earlier, in a fit of garden fever, I removed the weed cloth from the base of both trees and planted some 'rebelina' bi-coloured violas and some native downy woodland violets (viola pubescens) under the birch. 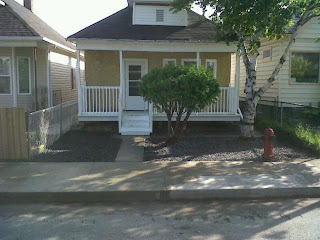 I can't take credit for plant choice as I have a wonderful garden consultant - William (Bill) Dowie - who has a very compatible esthetic and is very knowledgeable about native plantings.  He is both helping me design a pair of gardens (I say I would like something like "x" and he says how to implement and/or modifies to create what I didn't know I wanted!) that can be gradually implemented and will be doing a lot of the hardscape building for me.  He is great in that he believes in teaching others to do the work so they can carry forward on projects and hopefully teach others!

The front yard will be mostly native plants (grasses, shrubs and flowers) with the hope of creating habitat for local bugs and bees and birds.  It will be a prairie cottage garden!

The back will be a set of raised beds and a low deck.  Bill also suggested a green-screened living driveway (maybe creeping thyme underfoot) for my car, nestled against the neighbour's garage.  LOVE IT.

Wish me luck everyone!  This will consume my life this summer.

I love Rhonda Jean's blog down---to---earth, she is all about sustainable living, frugal living and living well, within our means.  She has a weekly feature called On My Mind where you blog and postof photo of something that is on your mind that day...share the link and people from all over the world connect through the magic of photos.


My cat Freya has been on my mind a lot lately - here she is 'helping' me wind a warp for my loom.  She stayed in Victoria when I got the job in Winnipeg, plan was she would stay with my senior Aunt and provide her with company and maybe inspire her to start caring about life again (long story but she has been down for a while).  Then when I was settled she would come out with my Mom whe she visited next or I would fly home and pick her up.  That won't happen now.  After I left she had a massive asthma attack and the drugs that saved her caused diabetes to arise.  After a discussion we decided we were not going to go the 2 shots of insulin a day (plus pills, ihalers and other meds) route.  Too stressful for Freya and for my Mom and Aunt.  So now Freya is living happily on minimal meds with my Aunt who has really rallied with caring about the sick kitty but she won't ever be well enough to travel.

She is almost 7 years old, I miss her a lot but I also know she is living the life of Reilly now.  :-)  She probably has a few months left as the next asthma attack will be fatal; but they will be better months than I could have given her and my Aunt is benefitting hugely from caring for her.

Freya, you helped me through hard patches in my life, I love you enough to let go when the time comes but I will never forget you and you will never be replaced in my heart.

Soda Bread with Herbs
As a huge fan of Susan at Wild Yeast and a follower of her weekly YeastSpotting feature I decided it was time to step off the sidelines and start baking again.  It has been years since I made my own bread but now I am in a place where I feel like being creative again!

Soooooo, in a blatant attempt to join the ranks of the Bread Baking Babes I dove in and tried this month's recipe for Soda Bread with Herbs.  It is fantastic though I did play with the recipe slightly.  I used half whole wheat flour and added about 3/4 of a cup of shredded asiago cheese.   I put in about a 3 tablespoons of mixed fresh herbs but not having rosemary I subsituted dill, thyme and oregano.  Those herbs don't have the pungent flavour of rosemary and the herby flavour was too light for me.

Boy, this bread had a lovely dense chewy texture and I am adding this recipe to my collection of "keepers"!  Making yeast bread has always been a meditative act for me, kneading the dough released my tension of the day and slowed my mind down.  This was a different experience, the time from start to finish was under an hour but the aroma of baking bread and sense of accomplishment as I cut that first, steaming slice were the therapy I needed today.  I started and finished a project - something I have not been doing lately.

Thanks Susan for providing the nudge I needed to get back into life with both feet!  :-)

Email ThisBlogThis!Share to TwitterShare to FacebookShare to Pinterest
Labels: baking

It has been a looong time since I posted, can you tell I never kept a diary as a child???  :-)

It was a long wait and I had pretty much decided to move from my adopted home of Alberta and return to Victoria where I grew up and where my Mom, Aunt, nieces and brother & sister-in-law.  So I loaded a selection of my possessions and my lovely ragdoll cat Freya in my car and drove home in early March to see if I could find work

I had been there 3 weeks when the e-mail came.  "We need someone to fill in asap - can you come?"  It was a hard decision as I was really enjoying living with my Aunt and being in the same town as my family for the first time since 1984.  I was looking forward to helping both my Mom and Aunt as they could use a cook and lifter of heavy things now and then.

So now I sit in my workroom and the job is temporary no more.  My dreams of the last 5 years came true and now I work at the Royal Winnipeg Ballet...  :-)

I am lucky, I worked a 5 month contract here 3 years ago when I first left college with my Costume Cutting and Construction diploma in hand.  I have friends here still and work for an awesome and incredibly talented woman who trusted in me and gave me a chance return to a place I loved and but stayed at for such a short time...

Thank you RWB...I won't disappoint you 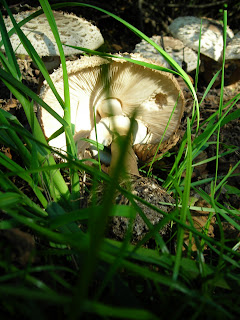 A close up of some fungi I met while biking 26 km of the Lochside Trail from Victoria to Saanichton (vVancouver Island, British Columbia, Canada) in September 2009.  Of all the photos I took I loved these mushrooms the best.

Posted as Part of "On My Mind" weely feature on the Down to Earth blog.
Posted by Janet at 5:57 PM 9 comments:

I know patience is a virtue but waiting to hear about this job interview is really, really tough!  I guess I must really like the job.  :-)   Ah well, I shall continue to wait by the phone...worst thing is the on-line tracker changed my status from shortlisted to "final evaluation" and I don't know if that means they have made a decision or if it is a signal they have entered the final discussion/decision phase.  ARRRRRGH.  Last time I applied there it remained shortlisted until the day they called to say the had hired another.

I know I have no one reading this yet but if you hit this post by chance cross your fingers for me or send me some well wishes.  6 months unemployed is ENOUGH!  :-)
Posted by Janet at 11:20 PM 3 comments: